Construction of a new building for the Higher College for Health Learning, Central Switzerland in Lucerne

Over the last three years, Bildungszentrum Gesundheit Zentralschweiz Xund has built a new teaching building on the site of the Lucerne Cantonal Hospital. With this new build, Xund has concentrated its seven previous sites in the city of Lucerne into a single new building. Basler & Hofmann was involved in the project as specialist consultant for the excavation work, the foundations and the structural engineering planning. One particular challenge was the freestanding spiral staircase in the atrium of the new building.

Various aspects of the planning of the excavations for the eight-storey school building were very challenging: the ground was contaminated with previous pollution and waste, which needed to be continuously sorted and properly disposed of while the excavation work progressed. In addition, the groundwater level in this area is just below the upper surface of the terrain. Since the new building fits into a heavily built-up area, it could not be sunk, as this could have otherwise led to differences in settlement. The ground consists largely of loose earth material, which is on top of a steep rock layer. Taking these factors into account, a leak-proof excavation pit was created for the new build, depending on the bedrock profile either using bored pile walls (bedrock profile in the area of the excavation pit bottom) or sheet pile walls (bedrock profile significantly below the excavation pit bottom). Where possible, the excavation pit was secured with pre-loaded anchors. Shoring struts were used where anchors from neighbouring buildings or works pipes would have been in the way.

Spiral staircase as an interior eye-catcher

Visually, the heart of the new building is a freestanding spiral staircase in the generously-proportioned atrium, which is full of natural light. This staircase leads the students to the classrooms on the gallery floors. The striking staircase was also at the heart of the planning of the load-bearing structures, with the interaction between the staircase and the connecting cantilevered intermediate floors proving a real challenge in terms of load transfer for the modelling and interpretation. For this reason, the interaction between the staircase and the rest of the building was carefully modelled and investigated in various models in the planning.

So that the atrium could be flooded with plenty of light, it was necessary to build a particularly delicate and intricate roof construction. Together with the architect, Basler & Hofmann developed a design with elegant concrete elements that could be mounted on-site with bolts on the structural works. 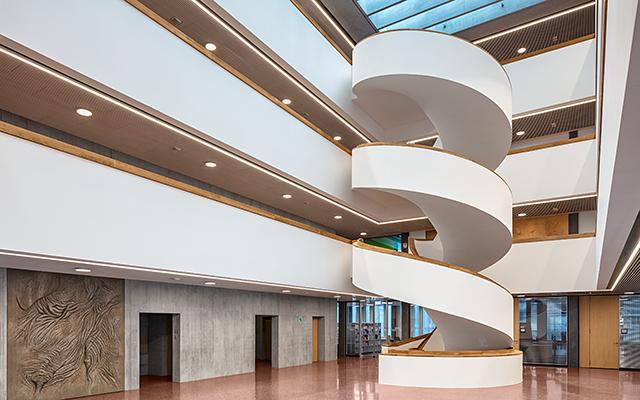 Project planning for the necessary relocation of works pipes, the excavation pit including de-watering and the foundations. Joint planning of the load-bearing structures. Consultancy on contaminated site loads in collaboration with the geologist. Swiss Re Campus: Deconstruction under a gigantic steel structure
Back to overview
Customize your experience