With the vision of the "Mythenquai Campus", Swiss Re intends to bundle all its employees in Switzerland at its site on the left bank of Lake Zurich by mid-2026. In order to erect the new "Lake" building to replace the former building, the "Mythenschloss" must be totally deconstructed, including four basement levels. To ensure that the 15-metre-deep excavation pit remains stable during deconstruction, the experts from Basler & Hofmann designed a huge excavation beam construction made of steel.

The replacement "Lake" building is the second new office building that Swiss Re is erecting as part of its "Campus Mythenquai" vision. The office building is located directly next to the "Swiss Re Next" headquarters, which was completed in 2017. Although the location in the immediate vicinity of the lake is extremely attractive, it is an engineering challenge. The deconstruction of the four basement levels is taking place almost entirely below the groundwater level. The groundwater level had to be lowered by about 15 metres using vacuum small filter wells to permit execution of deconstruction work. Basler & Hofmann's experts for structural design and special underground engineering came up with an unconventional solution to ensure that the walls and bottom of the original excavation pit would not cave in as a result of the pressure of earth and water and without the supporting effect of the Mythenschloss.

The former Mythenschloss was built in the 1980s using the cut-and-cover method. This construction method used all the basement ceilings as bracing slabs to brace the excavation pit and consists of a diaphragm wall that is only 60 centimetres thick. The existing diaphragm wall had to be braced before the four levels of the underground car park, including the base slab, could be removed. For this purpose, Basler & Hofmann developed a cross-lot bracing strut construction made of steel, spanning the entire 70 x 90 metre area of the excavation pit. The forces acting on the diaphragm wall are transferred via longitudinal beams to massive vertical steel girders. These transfer the forces to the cross-lot bracing strut construction and the floor slab. Since the floor slab must function as a bracing slab at all times, it is dismantled in stages and replaced by a new, deeper floor slab.

The spectacular deconstruction has been underway since summer 2021. As soon as the floor slab is replaced, the reinforced concrete supporting structure for the new building will be erected and will consist of four basement floors and seven upper floors. Around 480 uplift anchors are being installed so that "Lake" does not start to float as a result of the high hydrostatic uplift pressures at its location next to the water. In its final state, the new building will blend into the lake front on the Mythenquai with an extremely carefully designed, red concrete façade. 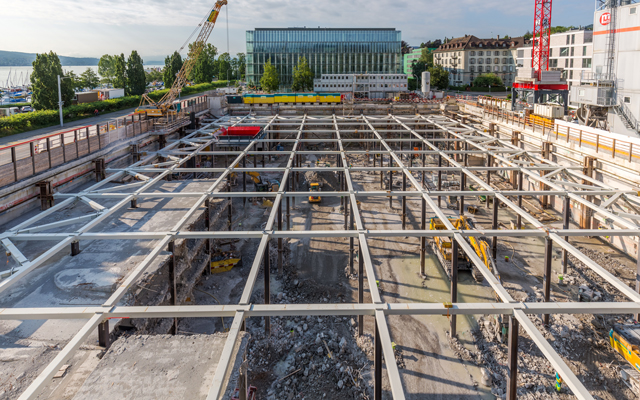 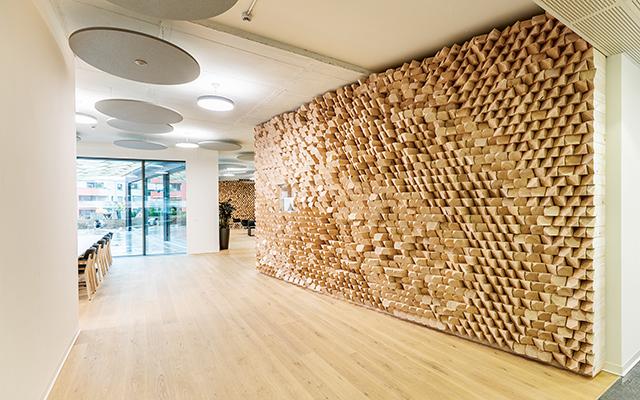