The world’s first energy-self-sufficient multiple dwelling has been put into service in Brütten, near Winterthur. The sun is the only source of energy – the building has no connection to an external energy supply. This posed two major challenges for planners: how could the energy be most efficiently “harvested”, and how could it be stored so that the cooking appliances and heating still work on dull winter days?

The energy requirements of a multiple dwelling can only be met by large-scale photovoltaics – covering much more than just the roof. Photovoltaic modules still do not enjoy much support as facade elements, however. Not attractive enough, too expensive – these are some of the arguments against them. The pioneer project in Brütten proves the opposite. The new multiple dwelling is clad from top to bottom in photovoltaic panels, but it is extremely difficult to tell just from looking at the building. With its matt, dark grey facade and light wooden window frames, it looks elegant and natural. The innovative facade solution, which was developed under the project management of Basler & Hofmann, consists of frameless standard thin-film modules. A special surface treatment then transformed each module into a uniform, matt, dark grey building panel. These panels were then thoroughly checked in terms of their structural properties and their performance in the shade.

The facade not only looks good – it is economically efficient as well. Building costs are somewhat lower than for a standard glass facade. Thanks to the electricity it produces, over the course of 30 years, a PV facade is even cheaper than a plaster facade.

Storage cascade for security of supply

The biggest technical challenge was not to produce enough energy, but to make it available at the right time. While the photovoltaic cladding produces a large proportion of the energy in the summer, needs are at their greatest in winter. With a completely self-sufficient stand-alone system, this surplus energy cannot be passed on to the public power grid and taken back again when needed – the energy must be kept in reserve using storage solutions. A whole series of storage solutions is planned for the Brütten project. Batteries provide short-term storage and, for the longer term, electrolysis is used to produce hydrogen that is stored in a large tank and converted into electricity via a fuel cell. Two underground water tanks are heated by the heat pump in the event of surplus power, and store heat until it is needed. This storage cascade enables the building to benefit from a high level of supply security, even without being connected to the grid. 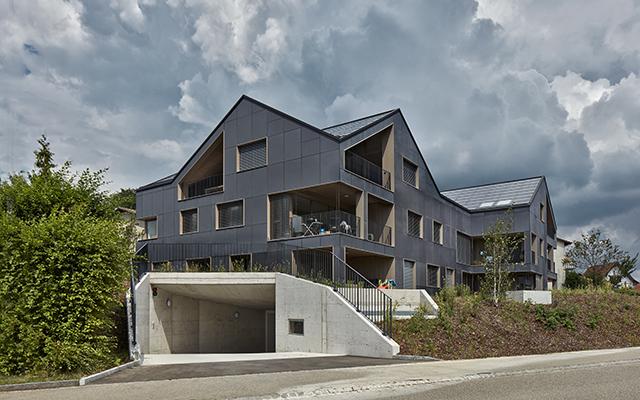 Project management and concept for PV facade, FE modelling for load-bearing behaviour, storage dimensioning and consulting on storage concepts.
The Swiss Federal Office of Energy provided support for the development of the innovative building envelope. 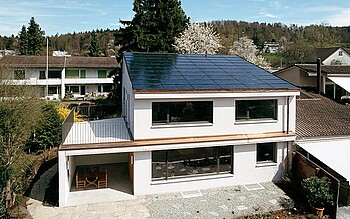 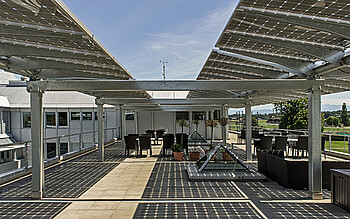 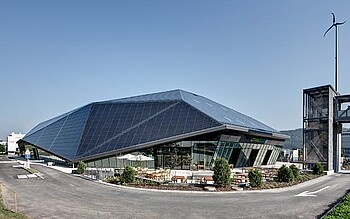